Weekend road trips are always fun, especially when they involve watching a bodybuilding competition, seeing friends, and training in new gyms. Well, that’s our kind of fun for a weekend at least!

A road trip isn’t complete without a glitch though, and we got ours out of the way right off the bat. Our plan was to quickly pack up the car after work and get on the road so we would get into London in time to go to a mall so I could return some clothing. Well, about 30 minutes into the drive, the warning light for low tire pressure came on. We pulled onto the shoulder and could see how flat one of the tires was (and hear it deflating!). So, on the side of the highway, Kyle put the spare on and we headed into a small “town” to find a solution. Well, in true small town fashion, pretty much everything was closed at 6pm. We found an old school gas station / garage and pretty much begged the man to patch the tire. He was nice enough to move us to the front of the line, so we hung out in the parking lot for about an hour. The rest of the drive was quick and uneventful, but we definitely missed the mall hours. 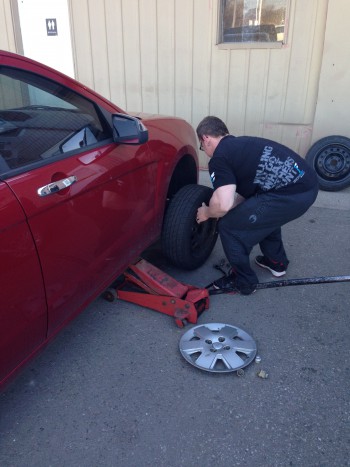 Saturday morning we opted to get up early in order to train before the competition started. The host hotel is around the corner from a GoodLife, so we’ve trained legs there before and knew it was decent. We had a great workout, the gym was nice and quiet at 7am, then we got ready and went to watch pre-judging. 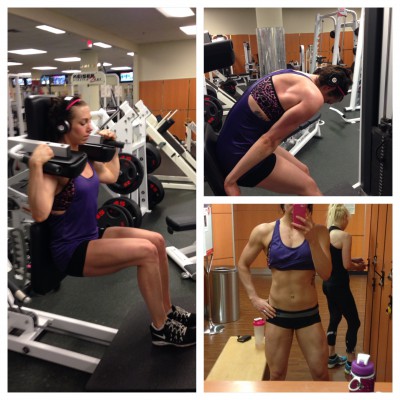 This leg machine is amazing, I wish we had one. The pump you can get in your quads is unlike anything I’ve felt before. Used this at the very end of our workout, and I tried to superset it with high rep hamstrings, but gave up on that idea pretty quickly.

Between pre-judging and finals, we raced over to the mall to do the returns and some browsing, then found an all-you-can-eat sushi restaurant for our carb refeed meal. It was definitely the best sushi we’ve ever had before. Added bonus – the menu was on iPad systems, and every item had a picture AND a full description. As someone who is fairly new to sushi, I always question what’s in the specialty rolls… it’s not like “Dragon Roll” tells you anything. The food was great, and we left sufficiently full.

The finals moved quickly, and the show wrapped up around 9pm, which is great for all the athletes. There’s nothing worse than having to wait until 11pm for your celebration meal, when a lot of restaurants are closed. This wasn’t a problem for us, obviously, as we already had our “cheat” meal for the day. During intermission, they had guest posing done by Danielle Ruban, an IFBB Fitness Pro from Canada. Her routine was great – I’ve seen some of her videos before, but never live. The fitness competitors always impress me so much, I’m jealous of their talent!

We kept the same schedule for Sunday morning, getting up early so we could train and get on the road home. We headed to a World Gym, which is fairly new in London, and a chain I had never been to.  It was probably the biggest, nicest gym I’ve ever been in! There were so many different areas and rooms, all the equipment was new, and everything had so much space around it. They had a few group fitness studios, spin studios, a basketball court, squash courts, and a cardio theatre. Yes, a theatre – treadmills, elipticals, and bikes were set up in a dark room facing a 200′ screen which plays movies. Something with Leonardo DiCarprio was playing while we were there. I tried to get a picture, but it was so dark, nothing turned out. Outside this room, most of the other cardio equipment had their own TVs built in, or were placed around large TVs. Definitely a gym to visit if you’re in the area. 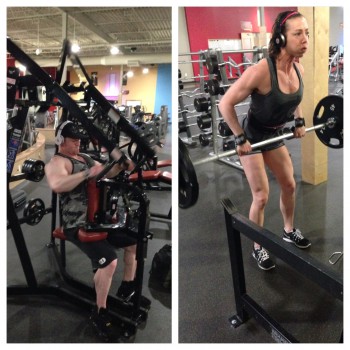 World Gym had one of Kyle’s favorite back machines, as well as dumbbells up to 200lbs! 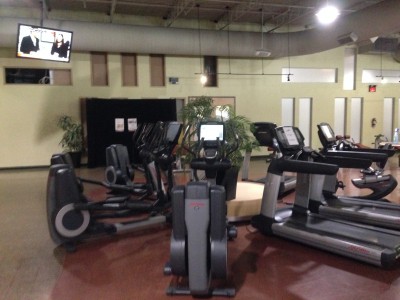 One of the cardio “pods”. I found it strange, that you would be staring at someone else across from you, but then saw they all have their own TVs… or a lovely plant to look at.

Watching a competition is a great motivator. While I was already looking forward to competing in Toronto, being back in the environment has just heightened that excitement. Seeing all the tanned athletes on stage only made me want to be there even more. It’s now five weeks out and my progress has been moving along steadily. This week’s diet changes should move progress a little faster (which is good because I’m impatient). Being at the competition has made it seem more real – plus the fact that I officially registered for Toronto!

Now, it’s back to reality – we picked up the puppies (who were exhausted and slept all day), cooked some food, did laundry, and have gotten ready for the week. We even managed to have time to relax and watch a movie! Kyle wasn’t too keen to watch Pitch Perfect again, so we watched Two Guns. It was pretty good, because Mark Wahlburg and Denzel Washington are in it.

Hope you all had a great weekend, too!

I'm passionate about health and fitness. I work as a Health Promotion Specialist, a group fitness instructor, and also a coach for physique competitors / weight loss clients. I grew up as a competitive athlete, and have continued with this passion as a Women's Physique competitor. Research and writing is another interest of mine, which I use to share my knowledge with the general public.
View all posts by Ashleigh →
This entry was posted in Bodybuilding, Competition Prep, Fitness, Lifestyle, Personal, Training and tagged car trouble, cardio, competition, fitness, goodlife, health, leg day, lifestyle, opa, puppies, road trip, training, travel, weekend, world gym. Bookmark the permalink.