I hope you had a terrific holiday week – full of family, friends, and plenty of great food. Our holiday break was even better than expected, for a number of reasons. It was relaxing, felt longer than it actually was, and we spent plenty of time with my family – something that doesn’t happen often. 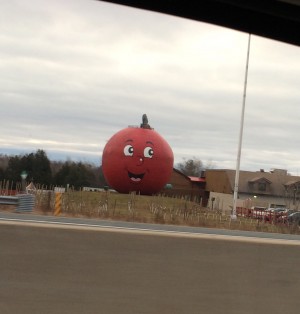 My favorite landmark on the drive to Ottawa – The Big Apple… but when did they paint the creepy face on it??

I think our break was relaxing for two main reasons – we were out of our own space, so the concern with constantly doing some kind of work was gone (at least for me). There was no nagging feeling about what needed to be cleaned, how many emails needed answering, or what playlist I needed to learn for classes. I actually mentally relaxed for four days and it was MUCH NEEDED. Also, we were pretty unplugged from social media. When I go home, I tend to become a complete hermit. I avoid my phone (other than needing it to look up store / restaurant hours, and directions), and just disappear from life in general. It’s truly great for a change of pace, going off the grid. Kyle and I spent time together – not just under the same roof, in different rooms – actually together!

We stayed with my brother and his girlfriend, but saw my parents every day. We managed to get to a few different gyms and had solid workouts, thanks to all the food we enjoyed… and there was plenty of it! Kyle and I made breakfast on Christmas Day, French toast with caramelized apples, bananas and pecans, turkey bacon, and scrambled eggs with peppers and onions. Christmas dinner was pretty traditional, but was accompanied with amazing cupcakes for my brother’s birthday celebration. If you’re in Kanata / Stittsville ever (probably not, but it’s worth saying), check out Beyond the Batter.  Other than that, we indulged in all you can eat sushi after leg day, and introduced my brother to Menchie’s frozen yogurt.

I’d wanted to make a gingerbread house for the last couple of weeks, so we bought a kit, and stopped at Bulk Barn to get better candy options. We may have gone a bit overboard, but it was worth it… because now we have left over candy! Success.

It might not look like the one on the box… but that’s just a suggested guideline. Anyhow, there’s no way they give you enough icing to actually pull that off. We’re just happy the roof stayed on ours after a few foundation shifts.

In an effort to make Kyle a well-rounded Canadian, we took him to the Parliament buildings. Now he’s been there in the summer and winter. They had a “light show” at the buildings, which my parents thought was going to be something more extravagant than it actually was. Either way, it got us downtown and out for a walk. Thankfully it wasn’t too cold out. 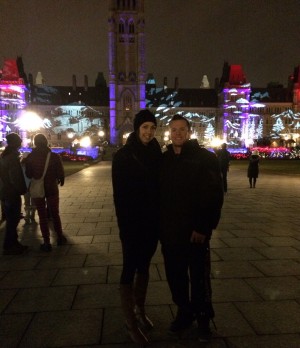 The light show wasn’t what we expected, but it was pretty.

Sadly, the free-for-all eating has to come to an end at some point, which would be now. We’re back home, all our food is cooked, and we’re ready to transition back into our regular off-season plan.

While it was a terrific holiday break and I’m really glad we made the trip, it’s always nice to be back home in your own space. Added bonus that we have this full week off work, so we can get some projects checked off the list. Yup, it’s right back to the usual grind!

Hope you all had a great Christmas, and enjoy the rest of the holiday season this week. Cheers!!

I'm passionate about health and fitness. I work as a Health Promotion Specialist, a group fitness instructor, and also a coach for physique competitors / weight loss clients. I grew up as a competitive athlete, and have continued with this passion as a Women's Physique competitor. Research and writing is another interest of mine, which I use to share my knowledge with the general public.
View all posts by Ashleigh →
This entry was posted in Bodybuilding, Health, Lifestyle, Mental Health, Nutrition, Personal, Training and tagged bodybuilding, eating, food, holidays, meals, mental health, nutrition, relax, training, vacation. Bookmark the permalink.