Sitting at 10 days out from the competition, and it’s time to get serious.  No, not serious about prep – it’s been serious for the last 3 weeks.  Serious about the struggle and the head games I’ve gone through.  This post is a totally honest look into prep and what it’s been like. Is it like this for every competitor?  Maybe not, but I would guess it’s pretty close to home for 95% of them – whether they want to admit it or not. Additionally, I think females suffer and cope in totally different ways than males do.  I’ve been through three competitions for Kyle and never witnessed the same behaviour or breakdowns. 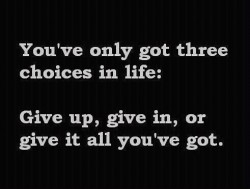 Problem 1 – I lack patience. No surprise here. When I wasn’t changing “fast enough” for my liking, I’d get upset. Then, my carbs dropped and I lost my shit.  I lost it a lot, actually, approximately 4 times last week. For one week, I was stressed, angry, and I felt terrible each and every time it happened. I think I traumatized Lulu one night as I yelled and she buried her face in the corner of the couch. I’m surprised she didn’t have a heart attack. Its ok, we hugged it out after. And poor Kyle just had to hold on and wait it out when the meltdowns hit. What does a meltdown consist of? For me, screaming about WHY I was behind schedule with progress, WHY I was eating such boring food and not looking good enough, WHAT the point of competing was, and if I should finish out this prep. It’s not pretty, and while I don’t want to dwell on it – this is the honest truth of prep.

Problem 2 – Stress from factors outside prep got to me.  As is the case in life, everything hits at the same time. My job has been a source of stress for the last couple of months as we go through numerous changes, and processes are getting updated which have frustrated me. Am I thankful I have a career, a stable job in my field of choice? Obviously, yes. But that doesn’t mean it’s all rainbows and cupcakes. Maybe if they served cupcakes it would be better… Anyhow, when the place you spend most of your time is a stressor and you ALLOW it to affect you, bad things happen.  I let myself get overwhelmed and it seeped into other aspects of my life – namely prep. My anger and frustrations from work got channeled through to my physique, and likely had a hand in making me look worse as my cortisol levels were through the roof.

Problem 3 – This prep was totally different from any of the others I’ve gone through in a lot of ways.  I came in carrying the most muscle mass I ever have and I never fully “recovered” from my last competition in terms of energy restoration. The first point of that (added muscle mass) was a good thing, and the second point was fairly negative. Because of the extra muscle, and not wanting to lose much through dieting, my protein intake was higher than ever before – and I was NEVER hungry.  Ok, never might be a stretch, but in comparison to other preps, there was no hunger. So good, right??  Well, in theory, yes. BUT, in my twisted mind, that meant something was wrong, that prep clearly wasn’t working because at four or five weeks out, I should have been starving! I couldn’t even let myself enjoy this small victory. Then, the exhaustion hit.  I mentioned this previously, but I keep hitting a wall really hard in the afternoon, feeling totally physically and mentally drained. Right now, there seems to be a pattern to this –  every other day I feel pretty good all day and the other days are BRUTALLY hard. The simple task of walking up the flights of stairs at work seems overwhelming (this is why Kyle resorted to taking the elevator during the last phase of his prep – he wasn’t joking about this feeling). Some nights I sleep well and others I wake up repeatedly, which only adds to the exhaustion – some of the effects of a super low body fat percentage. Breaking out the melatonin tonight!

Prep is stressful – no matter how cheerful and positive you are. You worry about your body all the time, you push yourself through extra training sessions, and your diet is restrictive (especially in the home stretch). All these factors take a toll on you mentally and physically, and then you have to throw in REAL life stuff like job(s), responsibilities like a house and kids (even of the fur-variety), some kind of social life or connection to feeling like an actual person. This is why people quit.  This is why I almost quit repeatedly – about 6 times last week alone, probably. But, after a firm talking-to by my coach and some time to let it sink in, Kyle’s support and patience through my meltdowns, and the kind words of encouragement from people at the gym, I got back on track and had a great long weekend. 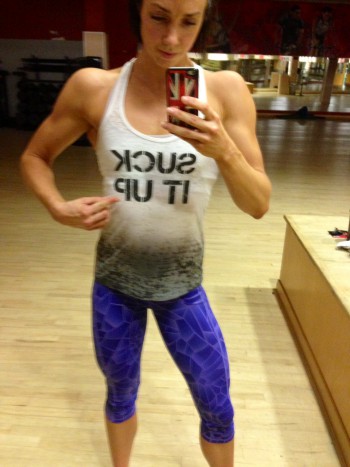 The end is in sight – sucking it up and pushing as hard as possible to the stage.

This post wasn’t done in an effort to get sympathy or anything.  For some reason, the “ugly” or hard side of prep is often buried and ignored. Competitors constantly post the glamorous stage photos or the great pumped-up selfies, but that’s just a small aspect of the process. The mental aspect is killer – even after 6 shows, it’s still a struggle for me. Each and every prep will be different and challenging as you’re pushing your body to do something it doesn’t want to do and that has a huge psychological impact on you, no matter who you are or what you’re trying to accomplish. From general weight loss, to stepping on stage for the first time, or competing at the Olympia – there are big ups and downs. Focus on the “ups” and fight through the “downs” if it’s a goal that means something to you in the long run. You’ll be proud of yourself when you come out at the end of it – even if you’re bruised, hungry, and tired.

Just 10 more days to give it everything I’ve got and then I can focus on my off-season to prepare for Provincials in June. I’ve got my mind set on that stage, and I’m looking forward to using the Windsor stage as another round of exposure and feedback from the judging team.

I'm passionate about health and fitness. I work as a Health Promotion Specialist, a group fitness instructor, and also a coach for physique competitors / weight loss clients. I grew up as a competitive athlete, and have continued with this passion as a Women's Physique competitor. Research and writing is another interest of mine, which I use to share my knowledge with the general public.
View all posts by Ashleigh →
This entry was posted in Bodybuilding, Education, Fitness, Health, Lifestyle, Personal and tagged bodybuilding, competition, dedication, fitness, focus, head games, honest, motivation, persistence, quit, stress, struggle, tough, training, ugly truth. Bookmark the permalink.

2 Responses to The prep struggle continues