Does it make it any better if I apologize for being so absent…. again?  The good news is that we’re fully moved into our house and OUT of the apartment, the bad news is that we were disconnected from technology for so long. But, we’re back in business now!

Quick recap of the last week: a friend and I went to see our suit designer for our upcoming competitions (exciting!), some major progress was made at the house with fun projects, we finally ordered counter tops, and we had some of the best workouts yet.

In all honesty, moving has made a huge difference in our life.  The impact that being unhappy can have on you over a long period of time is draining – both physically and mentally, and we were definitely feeling it. I can’t even really pinpoint what exactly the issue was, but everything added up and we were feeling some serious strain and stress living in that space.  Getting into the house, even though it’s so unfinished, made an instant, positive change in both of us! I’ve asked Kyle to write a post about this because he experienced a major change, and he’s promised to get to it in the near future. I want him to share it with you guys  because I think it’s important to highlight the impact stress can have on every other aspect of your life.  Regardless, we’re in the house – busy, adjusting, but so much happier, and that’s all that matters!

As any indication of how we felt about living in the apartment – THIS situation is a million times better than there…. 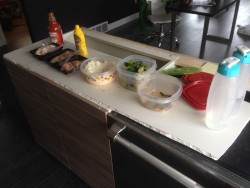 Who needs countertops when you have drywall as prep space??

Our temporary kitchen sink – the pinkest bathroom ever.

In terms of prep, I still don’t have much to share. Some small changes were made this week, and I’m hoping to see the outcome next week. I have a serious lack of patience, and expect to see changes regularly (daily, to be honest), and that’s just not how this works. Last year I prepped so quickly and DID see results immediately, but now that I’ve got time to do it right, I need to change my expectations. That being said, I know things are changing, and I usually notice stuff every week or so, which I’m happy with. The worst case would be rushing things and losing muscle mass in the process. There’s still two months to go!

This blog post isn’t very helpful, more of just an update and to let you know I haven’t abandoned the site. However, I am working on a bunch of more helpful / informative / educational posts, covering cheat meals, social support, and another myths post, so hang in there!!  The month of April is insanely busy, but I PROMISE to get more up now that we’re basically settled in 🙂

In the mean time, I wanted to share some things that I’ve found and LOVE:

1. These workout pants (aka Magic Pants). I ordered them online from Old Navy because they were really cheap… and they’re seriously AMAZING! I actually like them more than my Lulu WunderUnders! I got them in full length pants (Black Jack print – black on black shattered glass) and capris (Black Jack – has light grey stripes) – you can’t go wrong for the price.

Magic Pants – pull everything in!

2. Prep has hit, which means I’ve rediscovered a love of mustard. Particularly THIS mustard. I tried it last year and loved it, but during the offseason, never touched it.  Now it’s back in the regular rotation – I always use it on my ground turkey & broccoli meal (mixed with Red Hot – a competitors best friend). 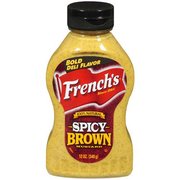 3. If you eat egg whites (who doesn’t… – oh yeah, me a year ago), you need to try adding oregano to them. My daily breakfast is egg whites with spinach, hot sauce and oregano cooked in, then topped with a little low-sugar ketchup. It’s incredible.

Now – go try some of those things & have a great day!! 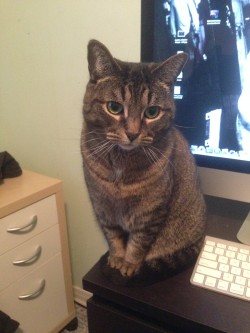 Moxie, helping me work. She’s the lesser known pet (because she’s mean), but you wouldn’t guess it from this picture.

I'm passionate about health and fitness. I work as a Health Promotion Specialist, a group fitness instructor, and also a coach for physique competitors / weight loss clients. I grew up as a competitive athlete, and have continued with this passion as a Women's Physique competitor. Research and writing is another interest of mine, which I use to share my knowledge with the general public.
View all posts by Ashleigh →
This entry was posted in Uncategorized. Bookmark the permalink.